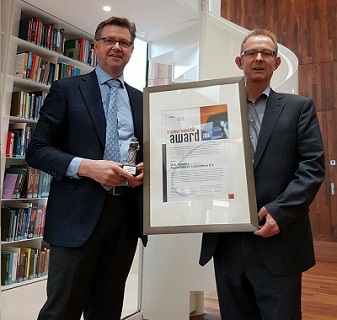 25.11.2016 Based on the results of the Erasmus Competition and Innovation Monitor 2016, Coldenhove Papier has been proclaimed the most innovative company of the Netherlands.

Coldenhove was presented with the 2016 Erasmus Innovation Award at the Getting Smart event in Rotterdam on 24 November 2016.

Three leading companies which have shown a high level of innovation were nominated for the 2016 Erasmus Innovation Award, whose shortlist was based on the nature of the companies, desk research and interviews with the companies’ managers:

Coldenhove received above-average scores for several indicators of innovation – to be more precise, indicators of technological and social innovation. The jury praised the company for the manner in which it continues to reinvent itself. One member of the jury called Coldenhove Papier a player in the “vanguard of the development of the paper-manufacturing industry”. Another member of the jury described the organisation as the epitome of a company active in a sector which is currently facing significant challenges.

In addition, the jury appreciated the company’s way in which innovation is organised. It spoke highly of the company’s introduction of innovation teams, an innovation board, an innovation objective and collaboration with various external parties, such as universities and universities of applied sciences. All things taken together, the winner of the 2016 Erasmus Innovation Award is a fine example of how innovation in the broadest sense of the word helps an organisation to keep going and to keep its employees in a job.